THE HAPPIEST DAYS OF OUR LIVES

Thanks to Dr. Allan Miller for the following article which appeared at the time of the publication of his book on the history of Up Holland Grammar School.

Local author, Dr Allan Miller, has just had his fifth book, entitled ‘From Up Holland Grammar School to Winstanley College’, published by the European Library. The book is dedicated to the late Mr J J Bagley, who taught at the school and who published his own history of Up Holland Grammar School in 1944. It is also a response to a challenge. In 1953, when the school moved to new premises, Mr Matheson, Chairman of the Old Pupils’ Association, wrote: ‘What a pity Mr Bagley’s splendid history of the school was published 10 years before its stirring final chapter could be written! Who will tackle this supremely worthwhile job? Perhaps an Old Pupil who loves his old school will rise to the task of setting down for posterity the details of this most memorable and joyous milestone in its life – its first new suit in its 300 years of progress.’ Dr Miller has risen to the challenge with relish. ‘I was a pupil at Up Holland Grammar School in the 1950s and taught there in the 1960s. I spent some of the happiest days of my life at Up Holland Grammar School and it has been a labour of love to write the history of the school to which I owe so much’, Dr Miller explained. The book has been written to mark the 50th anniversary of the opening of the new school and it tells a fascinating story. 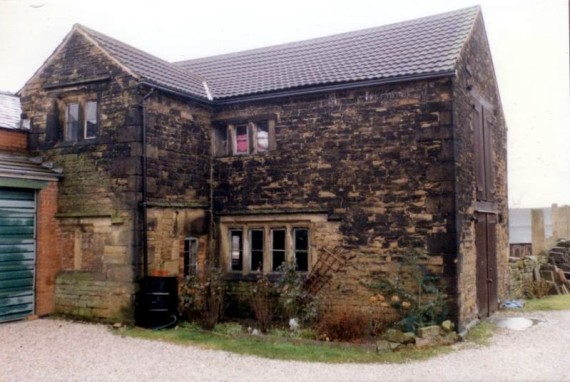 In the 1640s Adam Martindale was forced to close his school in Up Holland because of the ‘great inconveniences’ and ‘constant alarms’ in the village during the civil war period. When the wars ended, people from both sides of the divide determined to provide a grammar school in Up Holland for local children. Gentlemen and yeomen from the area provided land and money and Up Holland Grammar School opened its doors to pupils in 1661. The original stone building is still standing in School Lane and some of its first set of rules make quaint reading. For master and scholars, the school day started at ‘seven a lock in the morning from February the first, till the first of October and (de)part at five. And the residue of the year that they meets at eight and (de)part at four’. Another rule declared: ‘That offences against God immediately such as are cursing, swearing lying either within the school or without as also profaning of the Lords day by playing or otherwise and such like offences be duly and truly Corrected’.

During the first 150 years of its history, Up Holland Grammar School endured a roller coaster existence but generally it was a story of decline partly because the curriculum dominated by Latin was not suitable to local needs. Its fortunes were changed by Reverend John Braithwaite, who was headmaster from 1782 to 1812. He changed the name to ‘Up Holland Academy’ and offered a more ‘modern’ curriculum in an attempt to attract children from more middle class families. Many pupils boarded with the headmaster and his family at ‘The Priory’ or ‘The Abbey’ – a house next door to Up Holland Parish Church. A plaque on the south wall of the Church is dedicated to Reverend Braithwaite who ‘conducted in this village a seminary, which was held in high estimation, and resorted to by youth from various parts of the country’. 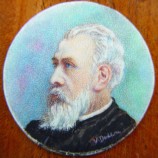 There then followed half a century of decline when a series of masters tried to re-establish a grammar school with a classical curriculum, even though at least one teacher had ‘little Latin and no Greek’ himself. This meant that on the upper floor of the old building was a master with virtually no pupils whilst the ground floor was packed with children being taught elementary reading, writing and arithmetic by another teacher. Matters came to a head when Reverend William Berridge was appointed headmaster in 1864 and immediately began to re-vitalise the upper school. He attracted more grammar school pupils but life in the congested little building was increasingly intolerable. The boys from both schools had to share the same playground and they ‘rail at and sometimes maltreat each one another’. The problem was partly solved when the junior pupils moved to a new building in Church Street in 1875, leaving both floors of the old grammar school to Mr Berridge and his pupils. 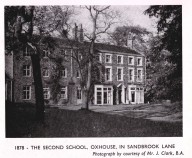 Under William Berridge, Up Holland Grammar School made remarkable progress because of his total dedication. However, the building was ‘utterly unfitted for the purpose’ until, under Mr Berridge’s leadership, the school moved in 1878 to new premises in Ox House Road – the site of the present Up Holland High School. The new building was ‘admirably adapted for scholastic purposes’ and Dr Ryle, Bishop of Liverpool, found it ‘beautifully situated in a charming and healthy neighbourhood’ with large gardens where ‘the students can play every variety of games. A Government Inspector commented that the school’s only ‘misfortune is the name of Wigan on the address’. She continued: ‘No one who had not seen it could imagine this green oasis within four miles of the blackest and dirtiest of Lancashire towns’. Mr Berridge was ‘indefatigable in his efforts to make the establishment one of the best in the country’ and when he left in 1890 he hoped that Up Holland Grammar School would continue to progress to ‘a much higher degree of efficiency and prosperity’ 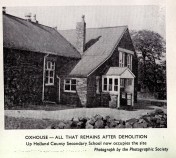 However, the fortunes of Up Holland Grammar School were to wane again and by 1907 its ‘uncertain usefulness’ in Lancashire County’s education plans ‘militated against official recognition by the Board of Education’. In fact, governors of the school were advised to consider its closure. Instead they appointed Charles Cox, who turned out to be a remarkable headmaster during the years 1907 to 1931. In spite of endless difficulties and opposition from many quarters, Mr Cox succeeded in turning round the fortunes of the school. Official visitors highlighted the ‘excellent spirit’ and gained ‘a happy impression of work actively and pleasantly done’. He introduced many of the facilities, which were later to become common place in schools – library, debating society, games, museum, weather station, visits and field work. Inspectors acknowledged that the school had ‘made substantial progress under improved financial conditions’. Mr Cox himself was particularly proud of the growth of the sixth form where ‘the course of education is completed’. After a long struggle, Up Holland Grammar School was eventually taken over by Lancashire County Council and fully recognised by the Board of Education.

The school continued to attract increasing numbers of students, to the extent that the premises became totally inadequate for the efficient running of an educational establishment. As a solution, Lancashire County Council proposed the amalgamation of Up Holland Grammar School and Ashton Grammar School on a new site. But for the outbreak of the Second World War it is likely that this amalgamation would have gone ahead.
Just before the outbreak of war, Alfred Maggs was promoted to the headship of Up Holland Grammar School. His first task was to steer the school through the difficult war years. He also had to oversee an enormous growth in the number of pupils, following the Education Act in 1944 which decreed that all grammar school places should be free to those pupils selected by the ‘eleven plus’ examination. The Ox House site had reached the ‘absolute maximum’ of its capacity. One parent described the classrooms as ‘faintly reminiscent of the dungeons of the Tower of London’. The art room was like a barn ‘except the smell’. The laboratories ‘might just have been passable in the days of Faraday’. In fact, the school would have made ‘a great location for the film Oliver Twist’.
However, there was ‘a wonderful spirit in the school’ and relief was at hand. In July 1944 Squire Bankes of Winstanley Hall made ‘a most public spirited and munificent gift’ of 20 acres of land in Winstanley for a new school and ‘the shadow that has rested over the school for so long has passed away’. But it was only in September 1953 that Mr Maggs could move his staff and 461 pupils into the new school in Winstanley Road. 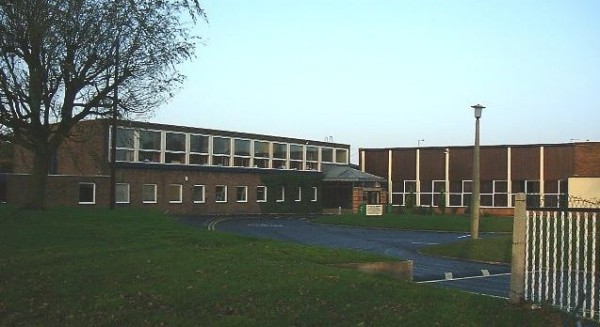 Under his successor, Brian Ellis, Up Holland Grammar School continued to prosper and develop. In 1965 Lancashire Education Committee unveiled proposals to introduce comprehensive education in the county. The governors feared that such a reorganisation of education would mean that Up Holland Grammar School ‘as we know it, will cease to exist’. In 1974, following local government reorganisation, the control of Up Holland Grammar School transferred from Lancashire County to Wigan Metropolitan Borough. On 30 August 1977 Mr Ellis became the first Principal of a new sixth form college opened in the grammar school buildings. It was called Winstanley College to avoid confusion with Up Holland College, the Roman Catholic seminary in College Road, now closed. Under Principals Lavelle and Watson, Winstanley College has continued to grow and develop and has been consistently ranked in the top five colleges in the whole country. 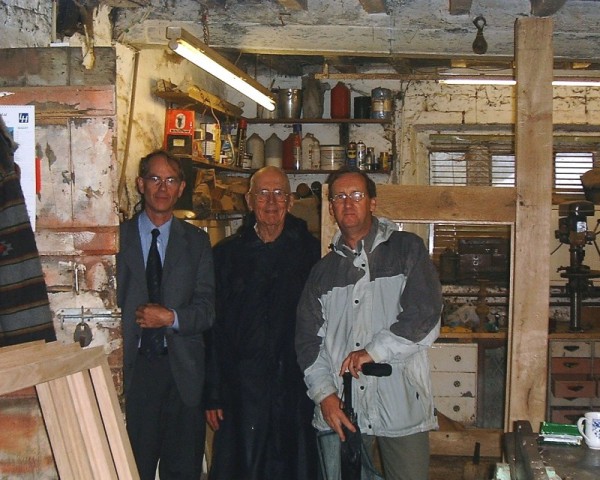 On 13th August 2005 I met Professor Peter Berridge Dean and his father Robert Berridge Dean, Ph.D. who were visiting from Boston USA where Peter is Senior Radiologist at Harvard Medical School. I accompanied them to Up Holland Parish Church and the old Up Holland Grammar School building in School Lane, Up Holland. Peter and Robert are direct descendents of the Reverend William Berridge who was Headmaster at Up Holland Grammar from 1864 to 1890 and mainly responsible for saving the Grammar school and making it a success. Without William Berridge Up Holland Grammar school would most likely have ceased to be and we would not have held our reunions in 2005 and 2010..... Thanks to Allan Miller for providing information on William Berridge for the visitors, and to Andy Griffiths, who has his workshop in the old Grammar School, for showing the visitors the old school.